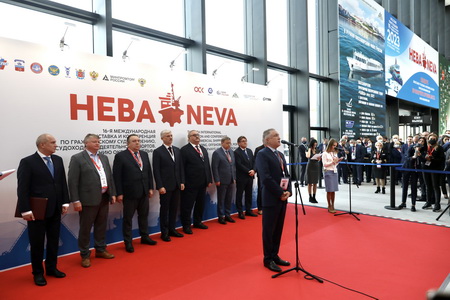 The 16th International Exhibition and Conference for Commercial Shipping, Shipbuilding, Offshore Energy, Ports, Inland Waterways and Oceanography, the largest in Eastern Europe and in post-Soviet space, opened triumphantly with a steamship whistle.

Mentioning that the exhibition is held once every two years, Alexander Poshivay emphasised that the government’s task to accelerate the development of water transport can only be solved with the close interaction between shipbuilding and shipping. “We need to not only increase the number and improve the quality of ships,” he said, “but we also have to bring Russian shipbuilding onto a larger scale”. In turn, Oleg Ryazantsev read a greeting from the Deputy Prime Minister of the RF Government, Yury Borisov. “Over 100 Russian and foreign companies are participating in the exhibition and conference Neva-2021”, the message states. “Over 10 national pavilions from Korea, Japan, France, Spain, the Netherlands and other countries await the visitors this year. The exhibition is a traditional attraction for industry professionals”. Oleg Ryazantsev personally wished the participants successful and productive work and entering into contracts.

Eduard Batanov focused attention on the fact that St. Petersburg is one of the oldest Russian shipbuilding centres, including for commercial ships. He cited as an example the order from Krasnoyarsk to build a passenger motor boat at the Sredne-Nevsky Shipyard and to build fishing vessels at the Admiralty Shipyards. In the closing speech, Alexey Rakhmanov thanked the official for the corporation’s advertising and reported that before the end of the year, USC will have made a complete move to the city on the Neva.