The first day of the exhibition "NEVA" will open doors for participants and exhibitors! 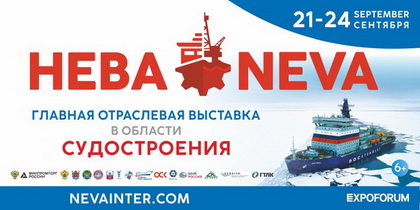 On September 21, at 11:45 am NEVA, the International Maritime Exhibition and Conference for Commercial Shipping, Shipbuilding, Offshore Energy, Ports, Inland Waterways and Oceanography will be open at the Expoforum Convention and Exhibition Center, St. Petersburg.

From 12:00 to 14:00 a plenary session will be held on the national strategy for the development of the shipbuilding industry and international cooperation. Invited speakers are: Deputy Minister of Industry and Trade of the Russian Federation Oleg Ryazantsev, Deputy Minister of Transport of the Russian Federation Alexander Poshivay, Deputy General Director of the State Atomic Energy Corporation Rosatom - Director of the Northern Sea Route Directorate Vyacheslav Ruksha, General Director of United Shipbuilding Corporation Alexey Rakhmanov and General Director of PJSC GTLK Evgeny Ditrikh. Participants will discuss the impact of the pandemic on shipbuilding, the main directions of technological development of shipbuilding, digitalization issues, prospects for international cooperation in shipbuilding and the localization of the production of ship components in Russia

At the end of the plenary session, the following official signing ceremonies will take place:

• 14:05-14:20 - signing of an agreement between the Corporation of Marine Engineering, Zvezda Shipbuilding Complex and the Far Eastern Center for Shipbuilding and Ship Repair;

• 14:20-14:30 - signing of an agreement between the State Transport Leasing Company (STLK) and the company "NEVA Travel".

Also on Tuesday, the following key - events of the NEVA2021 business program will take place:

• 13:00-15:30 – Business session "Present and Future" at the stand of the Russian Maritime Register of Shipping;

We kindly invite you to visit the "NEVA 2021" exhibition and business program!