The webinar « NATION BUILDING THROUGH SHIPBUILDING » took place on December 1-2.

The webinar was organized on the initiative and at the site of the St. Petersburg State Marine Technical University (SMTU) together with the Pondicherry University. The event was supported by the Ministry of Industry and Trade of Russia and SUN/ELCOM GROUP (India). NEVA Exhibition & Conference has made a great contribution as a partner. The event took place on the eve of the meeting of the Russian President Vladimir Putin and the Prime Minister of India Narendra Modi. The participants were greeted by the Ambassador Extraordinary and Plenipotentiary of Russia to India N.R. Kudashev; G.S. Poltavchenko, Chairman of the Board of Directors of JSC USC; rector of the Saint-Petersburg State Marine Technical University, Professor G.A. Turichin; Larsen & Toubro's whole-time director and senior executive vice president (defence and smart technologies) J.D. Patil and Vice Admiral DM Deshpande. 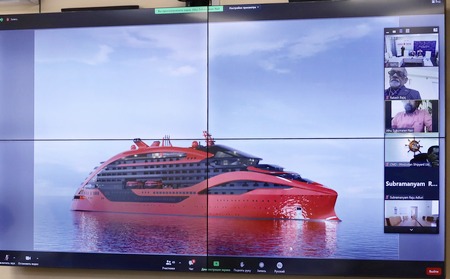 More than thirty reports were presented at seven sessions of the webinar. Many topical issues were discussed, including the creation of ships made of composite materials, floating power units with a nuclear power plant and liquefied natural gas, integrated ship electric propulsion systems, modernization and technical re-equipment of shipyards, the development of technologies in the field of search and inspection systems, the application of industry 4.0 technologies. (additive manufacturing, autonomous shipping). The issues of protecting the marine environment, using renewable ocean energy and combating oil spills in the freezing seas were also discussed. The university session was attended by graduate students of the St. Petersburg State Marine Technical University SMTU and the Pondicherry University.

The webinar was held as part of the SMTU events on fulfillment of the instruction of the President of the Russian Federation №Пр-651 of 22 April 2021 in terms of strengthening and developing cooperation with India.